In general, licensing laws require that businesses obtain a license to operate a certain type of business, whereas zoning regulates how land can be used. Read more on the differences between licensing and zoning. Both strategies can be used to restrict the density, type, and location of tobacco retailers. This matters because retail availability of tobacco: See the infographic below on how to restrict tobacco retailer density and why (click to enlarge, or access the Spanish language version) then check out the companion factsheet from ChangeLab Solutions, “Tobacco Retailer Density: Place-Based Strategies to Advance Health and Equity.” Learn more about licensing and zoning strategies below. Retailer density reduction strategies will have different impacts in different communities, depending on demographics and urbanity. See “Tobacco Licensing Laws: Improving Equity” from Ohio State University for a closer look at which strategy might help advance health equity in your community.

Certain types of businesses are required to purchase government-issued retail licenses that grant license-holding businesses permission to sell certain products under certain conditions. Generally, tobacco retail licensing (TRL) at the local level requires that the city or county issue businesses, new and existing, a license before they are allowed to sell tobacco products. As of 2020, 39 states require a license for over-the-counter tobacco sales. For additional information on state-level TRLs, see: 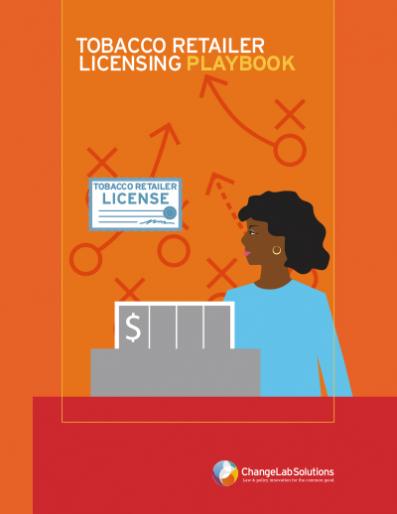 The evidence for implementing or strengthening TRL policies

Tobacco retail licensing is an evidence-based way to reduce tobacco use, and it can be used an effective way to substantially reduce the density, type, and location of tobacco retailers.[7] In doing so, TRL policies can help reduce disparities in how tobacco products are marketed and sold across different communities (Read more).  It is a versatile regulatory platform that can be used to:

A retailer licensing policy can help a community monitor and manage the number of tobacco retailers and is a typical policy lever pulled by towns or cities to manage the number of alcohol retailers. In December 2014, San Francisco passed a landmark tobacco retailer licensing law called the Tobacco Sales Reduction Act, which sets a cap on the number of tobacco sales permits allowed in each of the city’s 11 districts, aiming to reduce disparities in retailers density in lower income and minority communities.  For more details on the city’s strategy and lessons learned, review Reducing Tobacco Retail Density in San Francisco: A Case Study. Watch this video from the youth of  San Francisco’s Tobacco Use Reduction Force (TURF) to learn more about the law and why it is so important.

In 2008, San Francisco became the first city in the U.S. to ban tobacco sales in pharmacies.  In February 2014, CVS announced its decision to stop selling tobacco products, becoming the first retail pharmacy chain in the U.S. to take such action. In Massachusetts over 80 cities and towns have enacted similar bans as of February 2014. Learn more about Massachusetts’ success in ‘Regulating Pharmacy Tobacco Sales: Massachusetts,‘ the second case study in the Innovative Point-of-Sale Policies series from the Center for Public Health Systems Science at Washington University in St. Louis. Learn more about Tobacco Free Pharmacies.

Story from the Field: Licensing E-Cigarette Retailers and Vape Shops

In April 2016, the Washington state legislature adopted rules to create a statewide licensing system for businesses that sell and distribute “vapor products,” including liquid nicotine.  The state estimates that approximately 6,000 retailers will be affected by the new licensing rules, along with roughly 150 “vapor products” distributors. The rules, which are expected to take effect in fall 2016, require retailers to obtain a separate license to sell “vapor products” online. In addition, many local communities have adopted their own licensing and permit requirements for e-cigarette retailers and vape shops. For example, San Marcos, California, recently passed an ordinance requiring any shop that sells tobacco products, including e-cigarettes and related devices, to purchase a city-issued “tobacco retail license.”  The city partnered with the San Marcos Prevention Coalition and the Vista Community Clinic, which conducted surveys of local e-cigarette retailers and vape shops and determined that a number of businesses were selling these products to minors in violation of state law.  San Marcos plans to use the tobacco license fees (roughly $190 per establishment) to ensure that businesses are complying with tobacco control regulations, including restrictions on selling to underage users. Read more.

Most local governments use zoning for land use planning. By dividing areas into zones, local jurisdictions can control the types of businesses allowed to operate in certain zones. Zones might be designated as residential, commercial, industrial, agricultural, or mixed-use. Zoning laws can enable local regulators to keep similar land uses together, and keep incompatible land uses separated. For example, a residential zone might prohibit tobacco, alcohol, and firearm retailers.

When writing ordinances, you and your team of legal experts can tailor provisions of zoning and land use laws by adding Conditional Use Permits (CUPs), which allow certain land uses (e.g., tobacco retailing) only upon agreement of special provisions. For example, you could specify that tobacco can only be sold in certain zones if retailers agree to more stringent conditions or regulations, such as not selling flavored other tobacco products (OTPs). CUPs also give local governments the ability to make decisions about whether businesses can be allowed to operate on a case-by-case basis.

Like tobacco retailer licensing, zoning is an effective way to reduce the density, type and location of tobacco retailers. Zoning and conditional use permits can be used to:

For an effective licensing or zoning policy, the Public Health Law Center recommends that the following policy elements be included:

Table compiled using information from a Public Health Law Center guide to Using Licensing and Zoning to Regulate Retailers. For more detailed information, example policies, and other helpful legal resources regarding licensing and zoning ordinances, visit the Public Health Law Center website. In addition, be sure consult your legal experts, as the content on these websites is no substitute for legal advice.